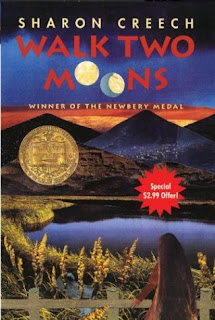 Title: Walk Two Moons
Author: Sharon Creech
Reviewer: Stephanie
Genre: YA Fiction
Rating: Worship
Alerts/Warnings: There is dealing with the disapperance of a parent.
Premise: Thirteen-year-old Salamanca Tree Hiddle's mother has disappeared. While tracing her steps on a car trip from Ohio to Idaho with her grandparents, Salamanca tells a story to pass the time about a friend named Phoebe Winterbottom whose mother vanished and who received secret messages after her disappearance. One of them read, "Don't judge a man until you have walked two moons in his moccasins." Despite her father's warning that she is "fishing in the air," Salamanca hopes to bring her home. By drawing strength from her Native American ancestry, she is able to face the truth about her mother.

Opinions: Okay, I'm going to tell you this up front. Unless you have a heart of stone, you will cry in this book. (Well, you might not cry if you aren't a crier, but you will be moved.) No one warned me of this and when I read it for the first time I started bawling my eyes out on the subway in the middle of Boston. True story. So I thought I would warn you. There is a high probability of tears. Just saying.

This is an amazing story within a story within a story. I never was confused as to which story I was in and I loved that it was unique in that way. I liked that the stories built upon each other and then everything made sense at the end. This is a masterful piece of writing and a phenomenal story. I highly recommend thos amazing book.
Posted by Fabulous Reads at 11:28 AM