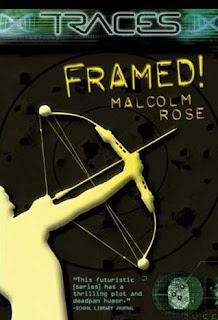 What's even more intriguing about the world that Malcolm Rose created is his main character, Luke. Having just barely graduated as the youngest forensic investigator ever he is almost instantly put on assignment to investigate a murder at his own school. I also love "Malc" (Mobile Aid to Law and Crime). He is a mechanical "Watson" to Luke as "Holmes". I love the relationship between these two characters as they work to solve the crime where all the clues point to Luke himself as the main suspect. This book is a unique twist on the typical murder mystery. Some of the descriptions of the crime scenes might be too gruesome for some readers, but other than that I definitely recommend this book as an enjoyable read.
Posted by Fabulous Reads at 4:11 PM No comments:

The Son of Neptune by Rick Riordan 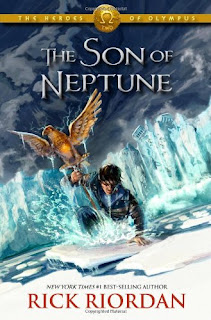 Title: The Son of Neptune (Heroes of Olympus Book 2)
Author: Rick Riordan
Reviewer: Karen
Genre: YA Fiction/Fantasy
Rating: Fabulous
Alerts/Warnings: None
Premise: "Demigod Percy Jackson, still with no memory, and his new friends from Camp Jupiter, Hazel and Frank, go on a quest to free Death, but their bigger task is to unite the Greek and Roman camps so that the Prophecy of Seven can be fulfilled." (King County Library System)
Opinions: Whereas the first book was from Jason's point of view visiting Camp Half Blood and those there that help him on his quest, this book we are back to Percy Jackson who is visiting Jason's home camp. I like the idea of this series of visiting two different cultures, Roman and Greek, where the pantheon of Gods is basically the same, but with different names and personalities. I like the idea of these two camps getting together and working through the disaster the Gia, the Earth goddess is throwing at them.

In this particular book I think my favorite characters are Hazel and Frank, Percy's fellow questers. Their histories are fascinating and their abilities brilliant. I love seeing things from a Roman standpoint; so even though Percy is the son of Poseidon, in the Roman world he is the Son of Neptune. It can be a little confusing at time, but still a brilliant idea. I especially love the Amazons and the harpies. I think mostly because they live in the Northwest - a place I'm personally very fond of. Mr. Riordan's continual attention to detail and imagery draws the reader in from the very start and makes this another one of his series that is hard to put down. I highly recommend it.
Posted by Fabulous Reads at 4:13 PM No comments:

Labels: Karen, YA Fantasy
Newer Posts Older Posts Home
Subscribe to: Posts (Atom)
Since there are so many marvelous authors out there writing fabulous works we reserve the right to only review on this website books that we like, adore, love or fabulous. If we do not review a book then we either do not know about it, haven't read it, or don't like it. If you don't see a book listed that you want to know about feel free to email us to see if we have taken the opportunity to get to know it better.