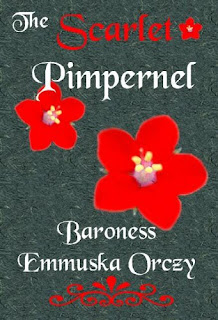 Title: The Scarlet Pimpernel
Author: Baroness Emmuska Orczy
Reviewer: Karen
Genre: Adult Historical Fiction
Rating: Fabulous
Alerts/Warnings: Some swearing, some description of violence associated with the French Revolution
Premise: "In 1792, during the French Revolution's Reign of Terror, an English aristocrat known to be an ineffectual fop is actually a master of disguises who, with a small band of dedicated friends, undertakes dangerous missions to save members of the French nobility from the guillotine. His friends and foes know him only as the Scarlet Pimpernel. But a ruthless French agent is sworn to discover his identity and hunt him down." (King County Library System)
Opinions: This is a fantastic story about love and overcoming pride. It is also a wonderful and slightly unusual look into aristocratic society and how they dealt with the French revolution from not only the French aspect, but from the English who did what they could to help those in need. The story is a bit difficult to get into at first due to the various dialects used to show differentiation in social classes. If you can get past that then this book is hard to put down and full of wonderful twists and turns.
Posted by Fabulous Reads at 9:00 PM