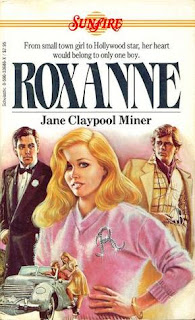 Title: Roxanne
Author: Jane Claypool Miner
Reviewer: Stephanie
Genre: Teen Historical Romance
Rating: Love
Alerts/Warnings: None (no seriously! NONE!)
Premise: From small town girl to Hollywood star, her heart would belong to only one boy. Theirs would be the greatest love story Hollywood had ever known.Roxanne has come from a small town to Hollywood with one dream: to become a star. And she will do anything to succeed: change her looks, her name, and her friends.She has to decide if she should succumb to John Randolph, the movie producer's son, who can introduce her to all the right people. Or if she should follow her heart to Gary Marlowe, a glittering star who has eyes for all of the beautiful bit players and extras on the set. But Roxanne knows she is not going to settle for being just another extra - to Gary or to Hollywood ... she's going to have it all! (goodreads.com)

Opinions: Okay, I know. I know. This is a romance novel. But I promise you, it would be rated G if it were made into a movie. There are a couple of kisses and that is all. It is very tame.

Roxanne is an Oklahoma girl who's mother has a dream that Roxanne will be a movie star. So they pack up and move to Hollywood. Roxanne struggles to make a name for herself in the movies, while she also tries to figure out who she really loves. It is a fun and interesting look at Hollywood during the Depression. And honestly, it is just a fun book.

NOTE: Roxanne is out of print. So don't hate me for reviewing this book. You can get it at some libraries, on amazon or if you live close to me and, you know, have my phone number, I'll lend it to you. Cause I'm just that awesome.
Posted by Fabulous Reads at 2:54 PM