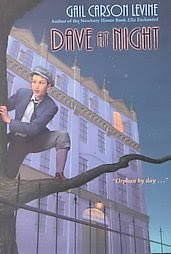 Title: Dave at Night
Author: Gail Carson Levine
Reviewer: Stephanie
Genre: YA Historical Fiction
Rating: Love
Alerts/Warnings: None
Premise: When orphaned Dave is sent to the Hebrew Home for Boys and treated cruelly, he sneaks out at night and welcomed into the music- and culture-filled world of the Harlem Renaissance, where he discovers the power of friendship

Opinions: Dave is a young boy who is orphaned and his uncle is willing to take his brother, but not him. So Dave is sent to the Hebrew Home for Boys. There he meets the brothers and he is treated cruelly by the staff. But he can't control his need to escape. So he discovers a way to go out at night to see the world. In the world he becomes involved in the Harlem Renaissance. In both the HHB and with his new friends he learns about love and true friendship.
This is an amazing book based on some of the experiences Gail Carson Levines' father had as a boy. So there is a touch of truth in this book. But it feels like more than a touch. It is beautifully done and a very moving story. I enjoyed it very much. I like that it gives you a look at serveral different lifestyles and situations. Also it taught me about the Harlem Renaissance. (I knew the Harlem Renaissance had occured, but I didn't know exactly what it was.) I really loved this book.
Posted by Fabulous Reads at 8:11 AM