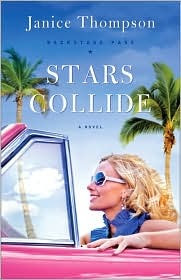 Title: Stars Collide
Author: Janice Thompson
Reviewer: Stephanie
Genre: Christian Fiction
Rating: Adore
Alerts/Warnings: None
Premise: Kat Jennings and Scott Murphy don't just play two people who are secretly in love on a television sitcom--they are also head over heels for each other in real life. When the lines between reality and TV land blur, they hope they can keep their relationship under wraps. But when Kat's grandmother, an aging Hollywood starlet with a penchant for wearing elaborate evening gowns from Golden Age movies, mistakes their on-screen wedding proposal for the real deal, things begin to spiral out of their control. (goodreads.com)
Opinions: I liked this book. It is a cute book about a girl who works on a TV show. It is funny, but not as funny as the "Weddings by Bella" series. I definately loved Grandma and I think that is one of Janice Thompson's strengths. She builds believable and likeable characters. There was very little that was suprising to me, but I enjoyed it. I thought the romance moved a bit quickly, but once I got to the end I better understood why it moved the way it did. This was heavier of the Christian aspect than "Fools Rush In" but I didn't feel that it was overpowering the story. All in all, an enjoyable read.
Posted by Fabulous Reads at 11:00 AM