My Unfair Godmother by Janette Rallison 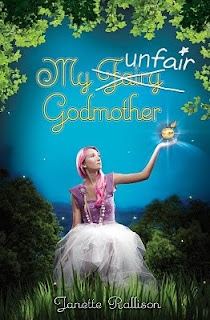 Title: My Unfair Godmother
Author: Janette Rallison
Reviewer: Stephanie
Genre: Teen Fantasy
Rating: Worship
Alerts/Warnings: None
Premise:Tansy Miller has always felt that her divorced father has never had enough time for her. But mistakenly getting caught on the wrong side of the law wasn't exactly how she wanted to get his attention. Enter Chrysanthemum "Chrissy" Everstar, Tansy's fairy in shining, er, high heels. Chrissy is only a fair godmother, of course, so Tansy's three wishes don't exactly go according to plan. And if bringing Robin Hood to the twenty-first century isn't bad enough for Tansy, being transported back to the Middle Ages to deal with Rumpelstiltskin certainly is. She'll need the help of her blended family, her wits, and especially the cute police chief 's son to stop the gold-spinning story from spinning wildly out of control. (goodreads.com)
Opinions: Okay, I know I've said it before, but I'll say it again. How AWESOME is Janette Rallison? I mean, seriously! She rocks! This book is the sequel to "My Fair Godmother" and I had high expectations. Not only did they meet my expectations, they surpassed them. It was quirky. It was funny. It was entertaining. It had a moral at the end. It had romance. It had adventure. It was just an enjoyable read from start to finish. My husband was annoyed that I was reading it (he wanted me to read something else, long story) but I could not put it down. I hope she writes another book in this series, because I really love the ideas she comes up with. But if she doesn't. That's okay. I'm sure whatever she writes will be great. Cause Janette Rallison. is. an. AWESOME. writer.
Posted by Fabulous Reads at 9:14 PM