To read my reviews of the other books in this series click here: Wings, Spells, and Illusions. 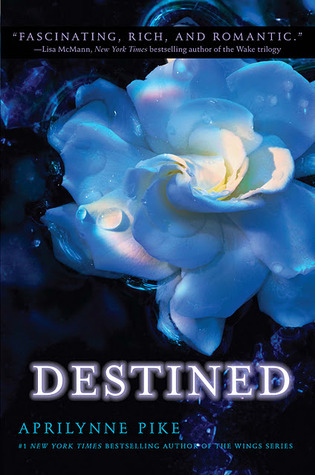 Laurel used to think she was an ordinary girl from Crescent City, California. She never would have believed she was truly a faerie from a realm called Avalon.

Now Laurel must risk her life to save Avalon from destruction by Yuki—a rare and powerful Winter faerie—and troll-hunter Klea. But Laurel won’t have to fight alone; David and Tamani, two boys she loves in different ways, will be by her side, along with her best friend, Chelsea.

Readers of the Need and Graceling series will want to follow Laurel’s story from its beginning in Wings to its heart-stopping end in Destined" (GoodReads.com).
Opinions: As the fourth and last book in the Wings series Aprilynne does an amazing job bringing the varied relationships into an even greater depth. We see the struggles each character goes through, not just in word, but mostly through their actions. There were several things over the series that I found frustrating on a personal note, but having now read this book I realize that it makes a whole lot of sense.  I appreciated certain individuals much more in this book. For example, Tamani become more real and vibrant as a character and a love-interest for Laurel.

The intensity of this book is greatly heightened due to Klea and Yuki bringing their fight to Avalon.  As such, some of the battle scenes may be a bit much for younger readers, and more than a few characters are killed along the way (I won't spoil the story by telling you who) but it is definitely not overly done. The story's pace was fast, the plot driving, and Aprilynne's imagination absolutely beautiful. I even found myself more than once in tears.  Overall, it was a very satisfying ending to a well written series.  I look forward to reading other stories by Aprilynne Pike in the future.
Posted by Fabulous Reads at 12:45 PM