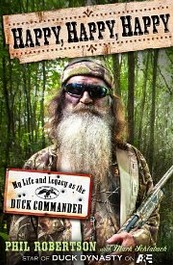 Title: Happy, Happy, Happy: My Life and Legacy as the Duck Commander
Author: Phil Robertson
Reviewer: Karen
Genre: Adult Non-Fiction
Rating: Like
Alerts/Warnings:  Instances of drugs, alcohol, but the consequences of those actions are also talked about.
Premise: "Life was always getting in the way of Phil Robertson's passion for duck hunting. An NFL-bound quarterback, Phil made his mark on Louisiana Tech University in the 1960s by playing football and completing his college career with a master's degree in English. But Phil's eyes were not always on the books or the ball; they were usually looking to the sky. Phil grew up with the dream of living the simple life off the land like his forebears, but he soon found himself on a path to self-destruction--leasing a bar, drinking too much, fighting, and wasting his talents. He almost lost it all until he gave his life to God. And then everything changed. Phil's incredible story tells how he followed a calling from God and soon after invented a duck call that would begin an incredible journey to the life he had always dreamed of for himself and his family" (King County Library System).
Opinions: I haven't had a lot of time to sit down and read a book lately. So instead I've been picking up books on CD from my library to listen to in the car while I'm driving my kids around or dropping my husband off at the train station. On a whim I picked up Happy, Happy, Happy by Phil Robertson. I knew of him from watching the show Duck Dynasty on A&E several years ago. But then we got rid of cable and I haven't seen it in years. So I figured, why not?

The CD of this book is read aloud by Phil's oldest son, Al. I was fascinated to learn about how Phil grew up in a very hard life, but that they had always been taught how to be happy, and really didn't understand that they were poor. Learning about how his mother struggled with depression and underwent electric shock therapy while being institutionalized, while around the same time his father had fallen off an oil rig and had to where a plaster cast from neck to hip for two years while trying to raise 5 kids during his wife's on and off absence.  I loved learning how he and Ms. Kay got together and I cried through their struggles as he went through several bad years of rebellion. Let's just say I have an new and incredibly high respect for Ms. Kay.

There were times I got lost when it came to Phil talking about all the types of ducks and their specific calls, but the stories about his life, his struggles, and how was blessed with family who cared enough and loved him so much, and how he chose his religion to help him through it all.

You may not agree with his life style, you may not agree with his political views, but after reading (or listening to this book) I believe you will come to respect Phil Robertson for his determination, perseverance, hard work ethics, and his love for his family and his God.   He has come far and is doing what he loves with a family he adores. That sounds like a great life to me. And listening to the story of his life has brought me a greater appreciation for my own.

So yeah I think you should read this book.
Posted by Fabulous Reads at 8:17 AM No comments: