Between Shades of Gray by Ruta Sepetys

To enter our contest, go here. 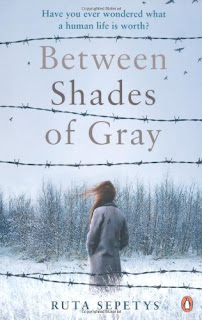 Title: Between Shades of Gray
Author: Ruta Sepetys
Reviewer: Stephanie
Genre: YA Historical Fiction
Rating: LOVE
Alerts/Warnings: There is a mention of a groping in a prison camp and some brief mentions of forced prosititution. But nothing graphic.
Premise: In 1941, fifteen-year-old Lina is preparing for art school, first dates, and all that summer has to offer. But one night, the Soviet secret police barge violently into her home, deporting her along with her mother and younger brother. They are being sent to Siberia. Lina's father has been separated from the family and sentenced to death in a prison camp. All is lost.

Lina fights for life, fearless, vowing that if she survives she will honor her family, and the thousands like hers, by documenting their experience in her art and writing. She risks everything to use her art as messages, hoping they will make their way to her father's prison camp to let him know they are still alive.

It is a long and harrowing journey, and it is only their incredible strength, love, and hope that pull Lina and her family through each day. But will love be enough to keep them alive?

Opinions: Such a powerful, heart-wrenching book. I sobbed several times in this book. There was a moment when I had to stop reading because I was crying so hard. As I was reading this book I realized how little I knew about what happened in Russia and the neighboring countries during Stalin's reign of Terror, and this book opened my eyes to it. Intellectually, I knew that Stalin was horrible and that he caused the death of millions of people. But I had never had a class on it or read a book about it. That changed this week when I read this amazingly touching novel.

Lina, her brother Jonas and her mother Elena, are "deported" from their home to Sibera. They don't know where they are going and people are dying all around them. But they are determined to stay together and to stay alive. You follow their journey for over a year and find that even through all the stink and horror they go through, there is still hope and determination to not let these horrible people beat them.

This is a power and moving book that I highly recommend. It is an amazing debut novel for Ruth Sepetys and I for one am anxious to read what she writes next.
Posted by Fabulous Reads at 8:43 PM

This was also one of my favourites from last year. Glad to see that you loved it too :-) Check out my review here
http://bronasbooks.blogspot.com/2011/02/between-shades-of-gray-by-ruta-sepetys.html