A Red Herring Without Mustard by Alan Bradley

To read the reviews of other books in this series please click here: The Sweetness at the Bottom of the Pie, The Weed the Strings the Hangman's Bag. 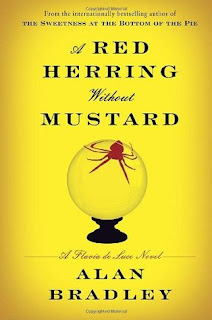 Title: A Red Herring Without Mustard (A Flavia de Luce Novel)
Author: Alan Bradley
Reviewer: Karen
Genre: Adult Mystery
Rating: Like
Alerts/Warnings: Mild Swearing, Moderately graphic descriptions of murder scenes
Premise: "Flavia had asked the old Gypsy woman to tell her fortune, but never expected to stumble across the poor soul, bludgeoned in the wee hours in her own caravan. Was this an act of retribution by those convinced that the soothsayer had abducted a local child years ago? Certainly Flavia understands the bliss of settling scores; revenge is a delightful pastime when one has two odious older sisters. But how could this crime be connected to the missing baby? Had it something to do with the weird sect who met at the river to practice their secret rites? While still pondering the possibilities, Flavia stumbles upon another corpse, that of a notorious layabout who had been caught prowling about the de Luce's drawing room. Her investigations will reveal more of Buckshaw's secrets as well as new information about Harriet, the mother Flavia never knew." (King County Library System)
Opinions: This is the third book in the murder mystery series that stars eleven year old Flavia De Luce. Like its predecessors it is ripe with intrigue, twists, and clever solutions revolving around chemistry. It is brilliantly written, but some of the descriptions of the scenes when the dead are found bothered me a bit (granted I am nine months pregnant and that maybe part of the reason). This particular novel not only revolved around solving the reasons behind vicious attacks and murders, I was really intrigued with the struggles that Flavia deals that force her to face the struggles of adulthood at her tender-but-brilliant age and to see her father from a different view point. If you enjoy a good murder mystery I think you will love the continuation of this series.
Posted by Fabulous Reads at 3:37 PM