City of Bones by Cassandra Clare 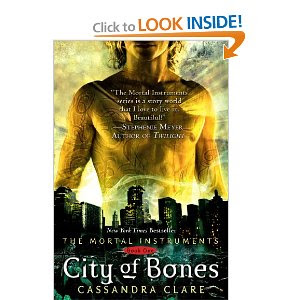 Title: City of Bones (Mortal Instruments Series - Book One)
Author: Cassandra Clare
Reviewer: Karen
Genre: YA Paranormal Fiction
Rating: Like
Alerts/Warnings: Some swearing, some violence from fighting monsters, and on a minor note a couple of minor characters are gay (so if that makes your uncomfortable don't read it). Though there are no sex scenes of any kind.
Premise: "Suddenly able to see demons and the Darkhunters who are dedicated to returning them to their own dimension, fifteen-year-old Clary Fray is drawn into this bizzare world when her mother disappears and Clary herself is almost killed by a monster." (King County Library System)
Opinions: I am not normally into paranormal fiction, but I'm striving to expand my reading base and introduce myself to authors that I've never read before. This is one such book. This book is set in modern day New York and shows a world of vampires, werewolves, demons, witches, mermaids, and much, much more living in the midst of, but unseen by, the normal human world.

It was a bit hard at first to get to know and understand the main character, Clary, but once the story gets going I had a hard time putting it down. In fact, I read I read it in less then a day. I was thoroughly intrigued by the premise and the twists of the story. There are fighting scenes where the Darkhunters have to fight and kill demons which may or may not bother some readers. As I said in the warnings, there are a few side characters who happen to be gay, but that isn't the focus of the story so I will leave it up to you if you want to read it. Personally, my favorite characters were Clary's friend Simon and Clary's "Uncle" Luke. There is a surprising twist at the end that left me dumbfounded, but I'm still eager to check out book two in this series.